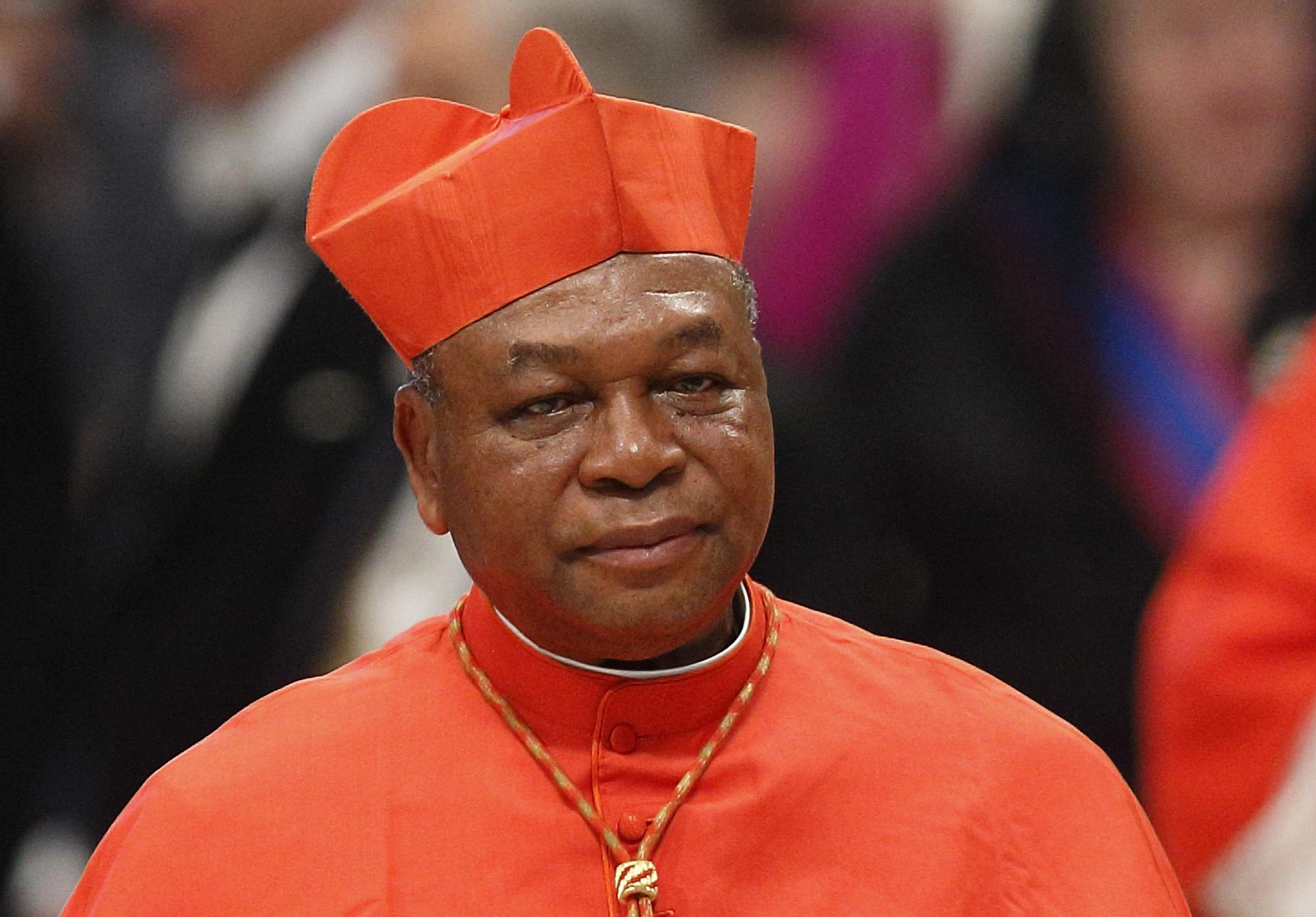 Cardinal John Olorunfemi Onaiyekan of Abuja, Nigeria, arrives for a consistory in St. Peter's Basilica at the Vatican in this June 28, 2017, file photo. In a speech in Rome Jan. 8, Cardinal Onaiyekan said he doesn't want to find a moderate Muslim to dialogue with, but one who is convinced of his faith. (CNS photo/Paul Haring) See VATICAN-LETTER-DIALOGUE Jan. 11, 2018.

According to the former top Catholic official of Nigeria’s capital city, the violence in the country is “getting out of hand.” It’s not only Christians paying the price, he said. None of the country’s 200 million people are safe.

“There is great insecurity throughout the country, people are being killed every day; bandits and terrorists seem to have a free hand,” said Cardinal John Onaiyekan, archbishop emeritus of Abuja. “We don’t know where the security forces are.”

“No one is safe, not just Christians. It is as if the government has lost control.”

The country has presidential and parliamentary elections scheduled for February and March 2023.

According to the prelate, both Christians and Muslims are victims of violence, perpetrated by criminals who “go around illegally killing innocent people.”

Speaking on the occasion of the XIX Plenary Assembly of the Symposium of the Bishops’ Conference of Africa and Madagascar (SECAM), which ended on July 31 in Accra, Ghana, Onaiyekan said his country has been experiencing “indiscriminate” violence since the rise of Boko Haram in 2009.

The insurgency group is one of the largest Islamic terrorist organizations, and their stated goal is to turn Nigeria into an Islamic state, much like ISIS tried to do in Iraq.

Boko Haram believes that Western education is bad, and as such, its members combat anything they perceive to be from the West, including Christianity. However, they are often labeled as an equal opportunity terrorist group, since, as Onaiyekan said, they don’t discriminate when it comes to carrying out their attacks.

Violence in Nigeria isn’t isolated to Boko Haram. Muslim-majority Fulani herdsmen clash frequently with Christian-majority farmers. Yet in this case, Onaiyekan said, the violence is not religiously motivated.

“They are killing more Muslims than Christians, which confirms that this is not a war of Muslims against Christians,” he said. “Many Muslims are suffering as much as we are.”

“When a priest is killed, the whole world learns about it,” he pointed out. “But when it comes to the murder of 50 villagers in Katsina state, no one knows anything. We have the certainty that more Muslims are dying than Christians because the center of the violence is in the Muslim-dominated northern states.”

The kidnapping of Catholic priests or other Christian clerics has become a common occurrence in Nigeria, with more than 20 having been taken in the first part of 2022 alone.

Echoing the concerns of other Nigerian prelates, Onaiyekan accused the government of inaction, and it is the State’s lack of intervention that has turned Nigeria into a “no man’s land,” whether it is “Boko Haram or any other criminal. This is not about Christians and Muslims. It is a question of respect and defense of human life.”

“Unfortunately,” he said, “many of the perpetrators have continued to carry the flag of Islam. My answer is that Christians must remain firmly Christian and know how to be faithful to their religion. When it comes to defending ourselves, we have to start working on ways and means to defend ourselves against criminals.”

The fact that Christianity is peaceful, does not mean that Christians are called to “sit back and let them kill us. We have every right to defend ourselves!”

Though falling short of urging the faithful to arm themselves, Onaiyekan did call on Christians to remain faithful to their call: “Be good Christians wherever you are. If you are a Christian and you are part of the armed forces, do your good work to protect people.”

On Monday, addressing the graduates of the fifth fellowship of the Cardinal Onaiyekan Foundation for Peace’s inter-religious dialogue and conflict program, the prelate also spoke about the violence in the country, and the need for religious leaders to come together.

According to Onaiyekan, Christians and Muslims in Nigeria – and in other African countries currently facing a similar situation of violence – need to join forces with leaders of traditional religions and politicians to deal with the common menace.

“We need a high dose of optimism and conviction to continue to work for inter-religious harmony and co-operation in our nation today,” he is quoted as saying by the Nigerian Leadership newspaper.

“This is what our foundation decided to continue doing no matter what the odds may be,” he said.

Onaiyekan said what Nigeria is facing is also happening in many African countries, adding that it needed urgent attention. He said that the intensity of the conflicts across Africa is frightening and said that social injustice, economic constraints and climate change had heightened insecurity in Africa.

“Africa must begin by investing more on addressing vulnerabilities for sustainable peace,” he said. “Peace is lacking in many corners of Africa. Managing Africa’s fragile peace means engaging in several evidence-driven interventions. The responses to numerous conflicts in Africa should be tailored to the specific realities and contexts of the conflicts and the environment.”

YOU MAY HAVE MISSED

August 16, 2022
A BRIEF TEMPLATE OF WHAT IS DESTROYING NIGERIA!

A BRIEF TEMPLATE OF WHAT IS DESTROYING NIGERIA!